The new BC step code energy intensity targets have been creating a stir in the building industry. A surprising trend is the frequency of homes that have thermal resistance values greater than the prescriptive code minimum standards, yet struggle to meet Step 1 or 2 of the energy step code.

Why does this happen? Because some homes rely on building components rather than a holistic design to optimize the components used. The step code’s quantitative requirements, based on energy intensity per square-meter of use-able floor area, is brutally honest in rewarding an effective and efficient building design.

All of these deserve spotlight, however, the parameter that doesn’t get enough attention is the building form. The layout, orientation, and geometry of a home greatly impacts energy efficiency. The goal of an effective building form is to ensure you aren’t using a Ferrari engine to push a solid block of concrete on wheels. As the wall height example and exposed floor example below will show, an efficient design minimizes the external surface area where heat can escape.

Let’s look at another example. Assume there are two homes that are identical, except this time Home # 1 has a 200 sqft room over an unheated garage, stuffed with R-28 batt insulation. By comparison, Home # 2 has the additional square-footage stacked above the first floor.

In this case, home # 1 has an additional 200sqft of floor area for heat loss, as well as an added 200sqft of ceiling area to lose heat from as well. The larger surface area creates an added heat loss of 4.39 W/K, compared to home # 2’s design. Home # 2 also has a great opportunity for patio space, and if the orientation is right, can also benefit from greater solar heat gain during the winter months.

A typical home’s energy use by is shown below. As you might have noticed, windows are on the heat loss side (window & door heat loss) and the heat gain side (utilized solar gains). In other words, windows are twice as important compared other components: they have ¼ of the thermal resistance (R-5-ish) compared to walls (R-20-ish), but also can gather free energy. This makes a building’s window layout and orientation a key parameter to energy efficiency.

The orientation with the most control is the south face. South facing windows have the greatest opportunity for solar insolation (i.e. free heat) to enter the home during the winter months. Additionally, south-facing windows can use overhangs to effectively control the heat gain during summer months, since the sun’s angle is high in the summer (and can be easily blocked), but low in the winter. Plan an overhang correctly and you can capture winter sun while blocking the summer sun. 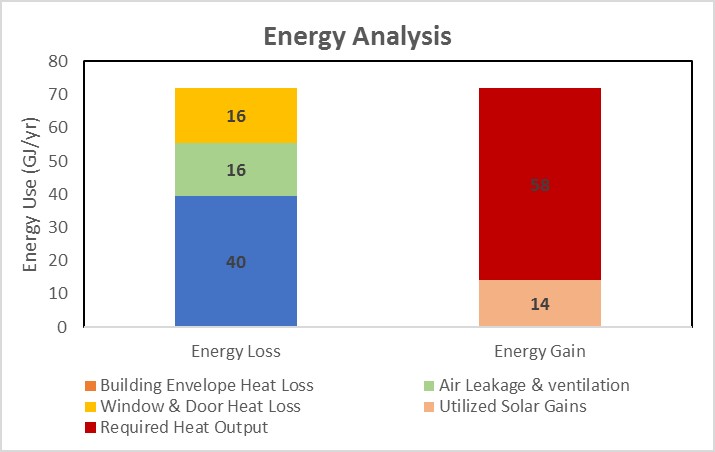 The design of your home can be selected to compliment energy efficiency. Homes with high wall heights, floor surfaces exposed to the exterior, and north facing windows can still meet step code energy intensity targets, but would require higher R-values or other design features to compensate for the less than optimal design.

Designing a home holistically with a building form that compliments energy efficiency would represent the lowest cost solution to meet an energy intensity target.